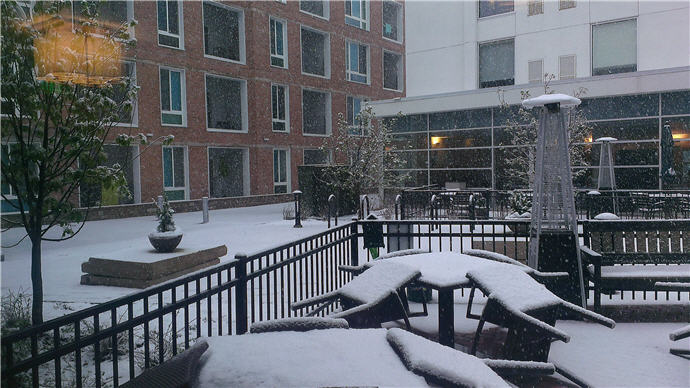 The other day I started this thread because I feel that maybe we live in our own little world sometimes and just cannot comprehend that there are dangers out there – simply because it seems illogical.

While Boulder, CO may be here in the states, one can easily get the feeling they need to contact Mr. Scott to be beamed up since there is too little intelligent life there…

Thankfully the organizer of the event is a self-described “gun nut”, and I had the privilege of hanging out with some heartland folks (Oklahoman’s), yet they were the exception.

On a previous visit I was entertained by a young guy from San Francisco who couldn’t wait for dinosaurs like me to die and quit ruining “his and his family’s planet”… After I explained to him that I owned a few hundred acres of trees, pasture, crops, ponds, etc that were turning the CO2 from his drive to the airport, flight to Denver, shuttle to Boulder and back again into breathable oxygen for he and his family he started to change his tune .. a little.

So going into this conference I knew I had to be ready for anything. There were fewer foreigners to come down on me for our country’s archaic 2nd Amendment (“if you don’t like it, get back on that friggin’ airplane and LEAVE!”) – side note, most of the foreigners were awesome folks! – this time I was a little blind-sided by voters from our own land…

Doc, that #$^%&@&*^# woman doesn’t HAVE a heart, and you didn’t notice her 180 degree transformation from Sec of State to candidate?

(In case you missed it, Hillary was 100% frumpy & angry looking from her choice of glasses and clothing to hairstyle and mean-face then suddenly turned all smiles and baby-kissing with a new ‘do, wardrobe and sans glasses)

IMHO, this woman is evil personified looking after her own interest only 100% of the time. And while other New Yorker’s see her as the carpetbagger she was running for the Senate in NY, this guy seemed to have no issues at all with her.

After that I turned around and heard a person speaking of how the press just suddenly dropped the story about Ted Cruz and all his affairs. In their opinion, obviously someone was paid off.

I gently pointed out that the news outlets are owned by liberals who certainly wouldn’t do Cruz any favors and perhaps they dropped the story because they found out their source was seriously flawed, and WRONG!

That possibility seemed to confuse their brain and I saw that deer in the headlights look for about a minute before the subject was changed.

How on earth (I know, I said it was like another planet…) business people like this could be smart enough to make a profit in a difficult line of work yet foolish enough to fall for the LIBTURD blather is simply beyond logical comprehension.

While it’s disturbing, as usual, at the makeup of the candidates in the race, they are a symptom of the electorate itself.

What concerns me is that Trump really doesn’t want the job and at times has emphasized his ability to “make deals”. Well, when it comes to the 2nd Amendment, I don’t want Trump or anyone else to “make a deal” – I want them to simply honor it, retain it and respect it!

And.. understand that without the 2nd Amendment there is no way for Americans to protect any of the rest of the Constitution and Bill of Rights.

The Attacks Will NOT Subside

As Bernie lays off campaign staff even he is realizing that at some point socialists run out of other people’s money (hat tip to the Iron Lady).

Hillary supporters, despite viral videos online replaying clips of her own speeches, are somehow able to ignore all the lies and deceit, stolen White House furniture, Benghazi, email scandal, insane numbers of dead people surrounding the Clinton’s going back decades and her flip flops on key issues despite video proof documenting her change in stance.

Trump supporters are ignoring Trumps past support of the Clinton’s, Harry Reid, Nancy Pelosi and others yet these people don’t scare me. They aren’t out to deprive honest hard working Americans of Life, Liberty and our pursuit of happiness.

Cruz is a staunch supporter of the Constitution, 2nd Amendment in particular and most everything real conservatives believe in. Even he, though, is susceptible to political reality as can be seen in his choice, and his premature choosing of, Carly Fiorini as VP running mate.

The next President will appoint a Supreme Court justice, maybe more than one. And I personally have no confidence in even a Republican controlled Senate to do right by the people and the Constitution in the process.

Remember, for some reason it’s perfectly acceptable for LIBTURD’s to have a “litmus test” for justices and judges but ridiculous for conservatives to do likewise…

… and the conservatives let them get away with it!

Start preparing yourself for the day when laws will be passed with the express intent of making us outlaws!

P.S. – I cannot emphasize enough the need to associate with and share information with like-minded patriots. It’s one of the biggest benefits of the PistolSnipe VIP Club.