A Squib Load is term used to describe an under-powered firing of a cartridge that results in the bullet not having enough power to exit the barrel – thus remaining stuck INSIDE THE BARREL; often from not receiving the proper powder charge during manufacture (or hand loading) or from ammo degradation via moisture, etc.

This form of malfunction can be extremely dangerous to yourself, those around you, and be catastrophic to the gun. If unnoticed, firing another round without clearing the barrel will almost always cause the structural integrity of the firearm to fail; i.e., pieces go flying at dangerous velocities!

Most times a Squib Load will be the result of non-professional reloading of ammo but not always; though using good quality manufactured ammo that has never been subject to improper storage is your best bet at avoiding one.

A squib load on its own is not really that big of a problem provided two things: 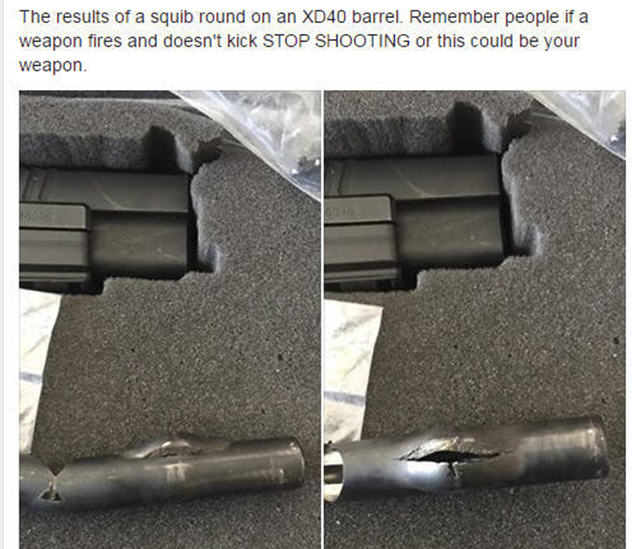 How To Detect A Squib Load

A squib load when fired will not have the normal noise or recoil that you would expect. There will be a muted bang, but no “crack” since the bullet never exits the barrel to break the sound barrier.

You may see a puff of smoke exit the barrel, as in the video below yet it will not look normal.

I personally have only witnessed a squib load once:

My brother was out at the farm with a S&W .357 magnum shooting reloads I had manufactured 30 years prior. As such, I warned him about the possibility of a squib load and not 10 minutes later he said “that didn’t seem right”. Thankfully he stopped shooting and unloaded the gun.

Upon examination it was easy to see the bullet just sticking out of the barrel.

More on this in my course, the IFR4X Pistol Shooting Accurizer Sytem™

What To Do When A Squib Load Happens

If you ever suspect a squib load situation has occurred:

Once you confirm that a bullet is lodged in the barrel, find a competent gunsmith or…

Proceed at your own risk with either a wooden dowel rod or appropriate brass squib rod and get the bullet removed. Personally I would thoroughly clean & lubricate the weapon before firing again after bullet removal (and I would use a brass brush on the barrel).

Video of a Squib Load Occurring

This video was graciously posted on YouTube; many thanks to all the folks involved in the incident and getting the video up so we all can learn from it.

BTW, yet ANOTHER reason we always wear eye and ear protection when around shooting even if we are not the shooter.